Hey! My name is Gabriel and I made, along with my partner Nicolas, the indie horror game Helltown. In this postmortem, I’ll mainly write about our development experience and share what we learned from this project as well as some advices. So, let’s start by the very beginning…

Horror is something that really piqued my interest in the last couple of years and I noticed that a lot of indie horror games were just a jumbled mess of store assets without any soul (especially on Steam). But there were some gems in the rough, games like Power Drill Massacre, I Remember This Dream, Darkwood, Amnesia, etc. Those games gave me the motivation to make a good one myself and games like Anatomy, Faith, From Next Door and others kept that motivation going. So I started making some low-poly characters and sent them to Nic (with whom I knew I wanted to make a game someday). He got really interested and agreed to start the development of what would become Helltown. 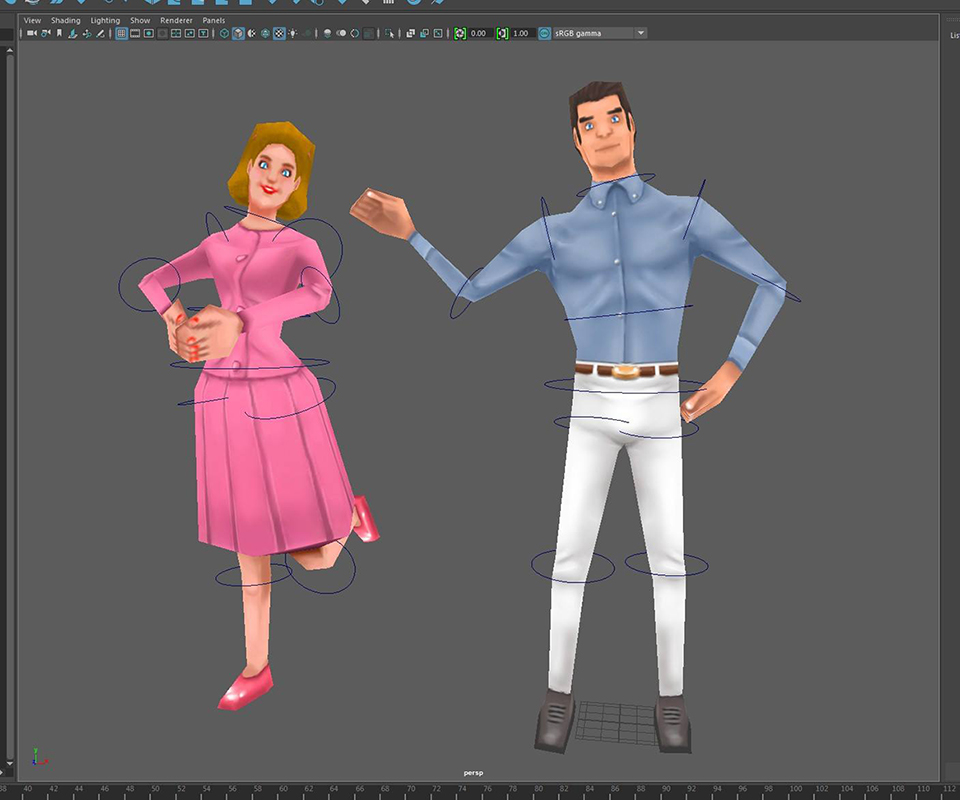 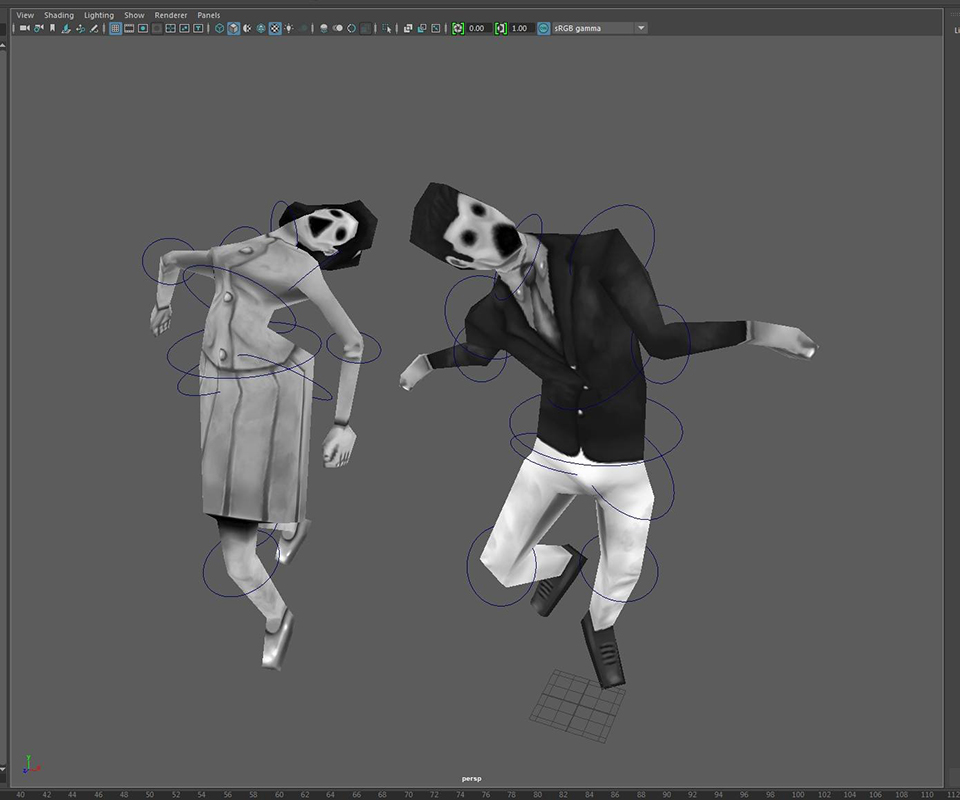 Helltown’s development was kind of a mess. This can be explained by 3 things:

Usually, you’d start with some level blocking, introduce the base mechanics and some rough art, make assets and then finally polish the whole thing. But for us, it was more like: make most of the game’s assets, make some levels, introduce the mechanics, think of how all of that fits together, add more stuff and polish the whole thing. Thankfully, we communicated well and we were still efficient. 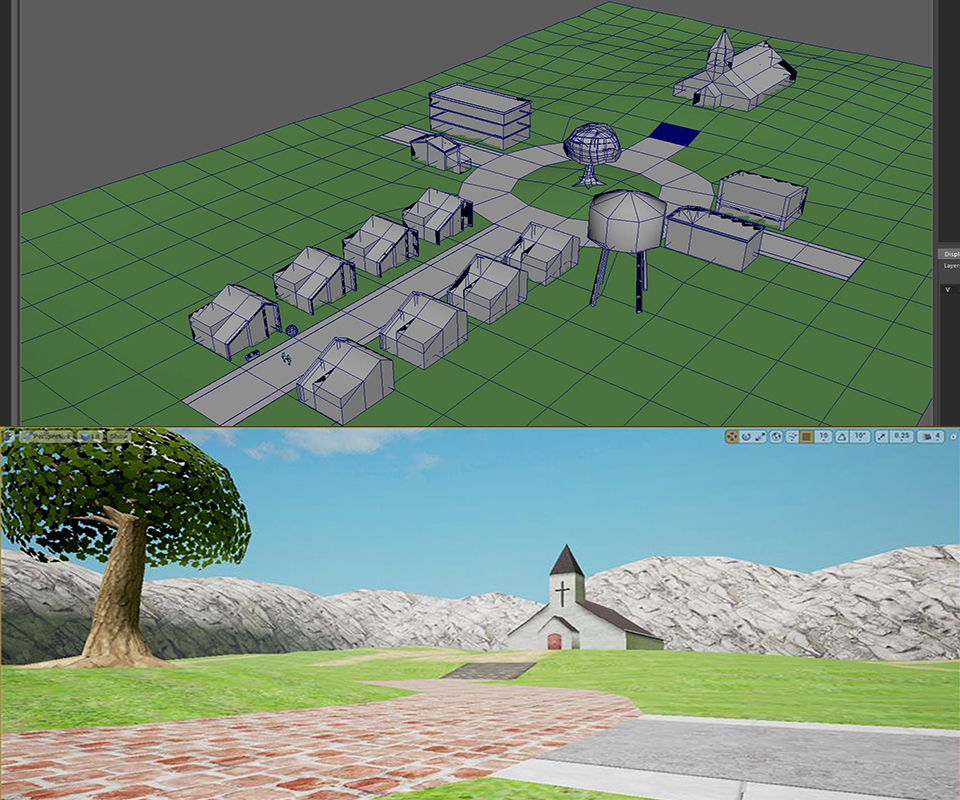 The blocking of Little Vale. 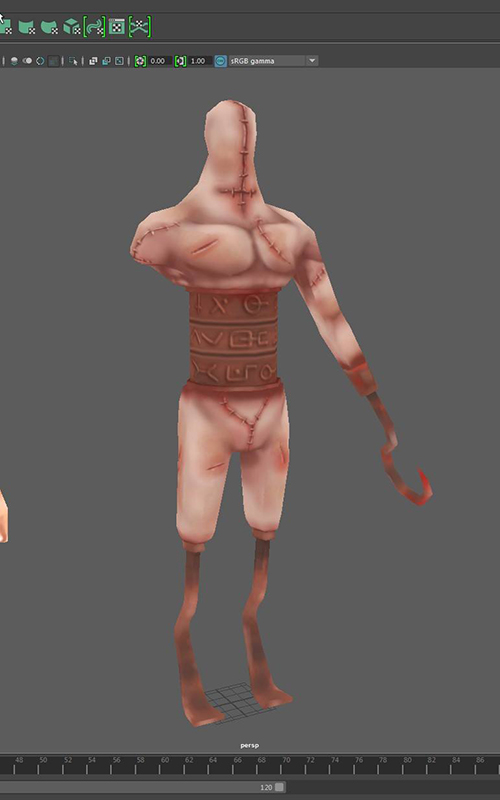 The enemies were some of the first assets I made.

Even before all that, the best practice, I think, is planning as much of the game as possible. You can change stuff along the way, but at least you have something to go off of. In our case, we pretty much improvised our way to the end. We had a basic idea for the structure, some basic schematics and some drawn level designs, but we didn't look at how everything felt as a whole or how well we transitioned the player between levels.

An early rough drawing of the game flow. 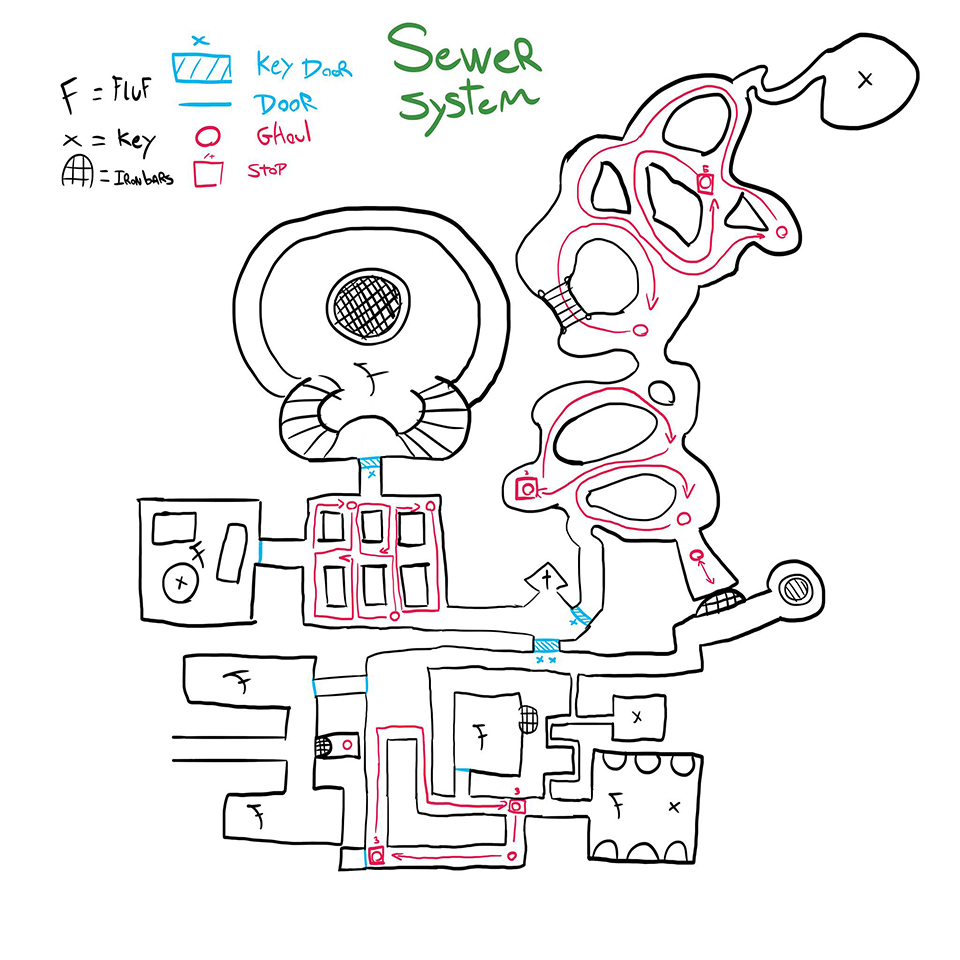 A design Nic made for the Death level.

As for workflow, we didn’t use source control (meaning that once I added new assets, I’d pass the project to Nic so he’d work on the programming and vice versa). It was far from optimal, but for the needs of the project, it wasn’t that much of an issue.

THE SPIDER AND THE THEME

Something we regret deeply is not having established a good theme at the start of the development. A theme can be anything (an idea, an emotion, a sentence, a mechanic) that ties to whole experience of a game together. I guess you could say it’s a creative direction. Like I said previously, my main motivation for the game was “make a good horror game” and the idea of an idyllic town hiding horrible secrets. The thing is, it was super unclear in my head and we didn’t come back to it whenever we’d make a decision about the story or the gameplay. That led to the experience being not as unified as it could have been.

I think it’s most apparent with the monster designs. I initially wanted each one to represent something (à la Silent Hill 2), but they just ended up being creepy for the sake of being creepy. 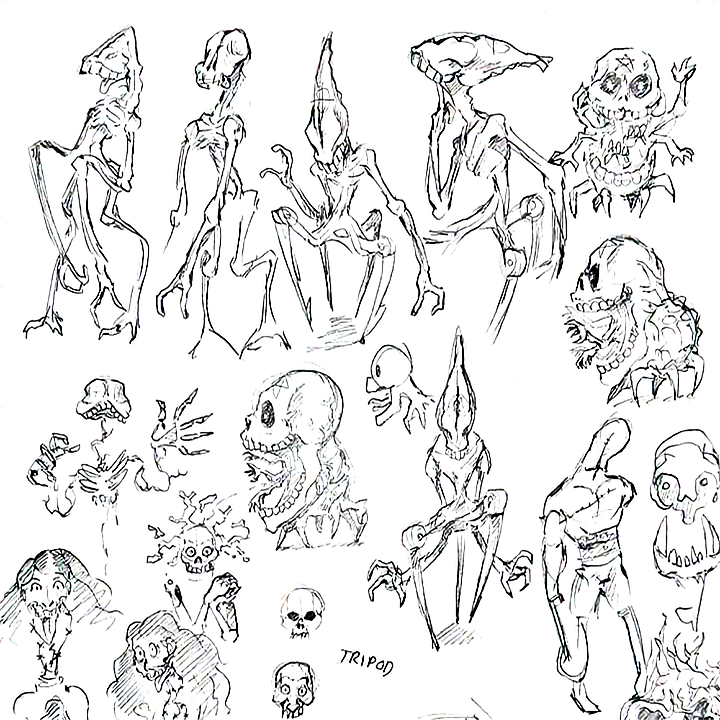 Sketches for some of the monsters. 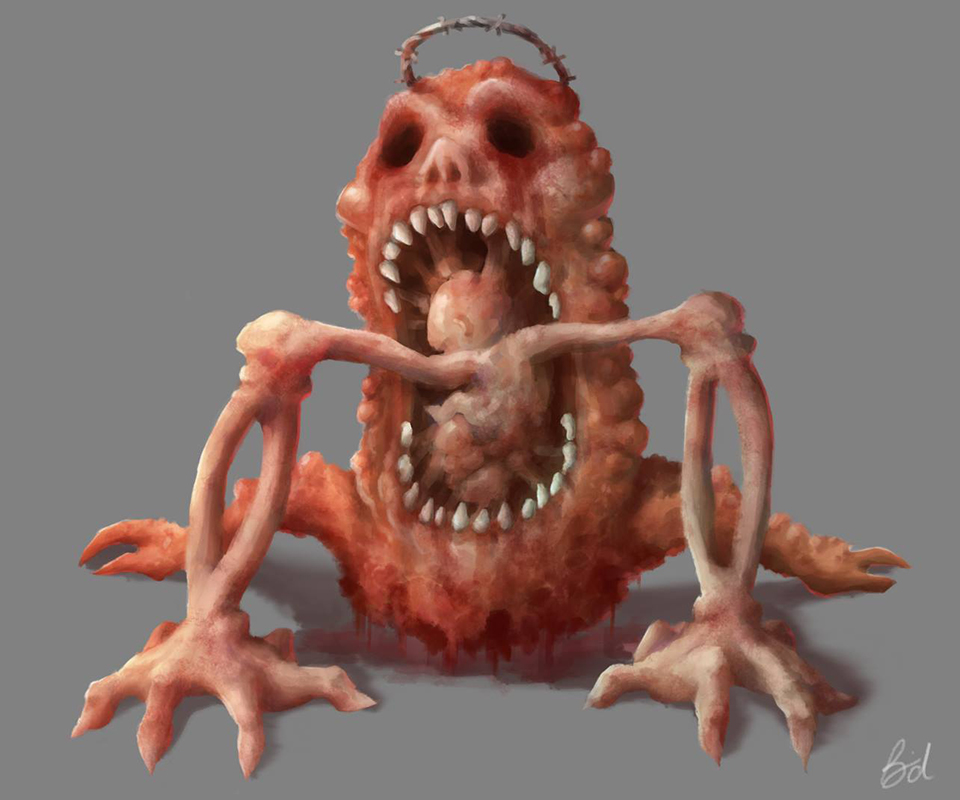 Unused monster design. Designed around the idea of motherhood (can’t remember why). 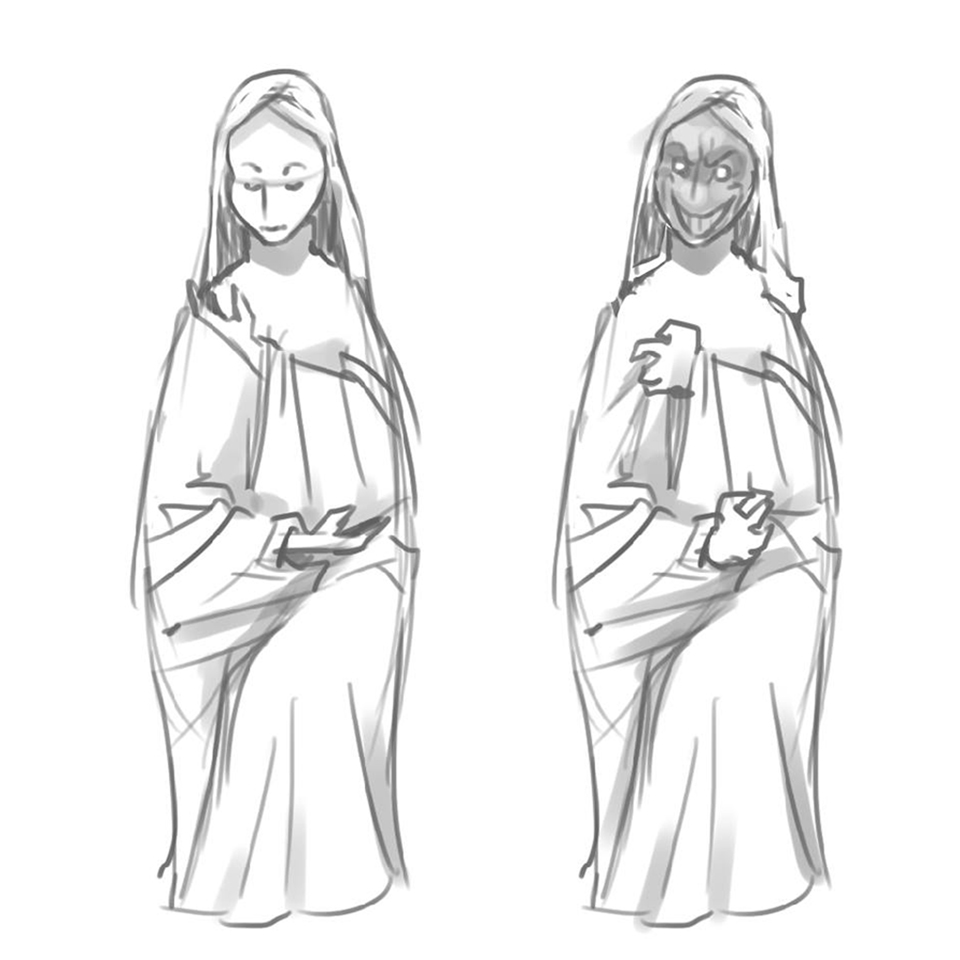 The design for the statue.

There are hints of us trying to unconsciously  follow the theme of “idyllic town with horrible secrets”, though. Playing as a postman was intended to make you snoop around the town and interact with its citizens, but there’s a lot more potential in that idea that we didn’t tapped into.

The game went through very few iterations between its conception to its release. We mostly added stuff towards the end (at the very beginning, there were only 3 days). I’m glad we added stuff, even though I wish we’d have explored more options (personally, Lilith’s Manor in the good ending is my favorite part of the game). 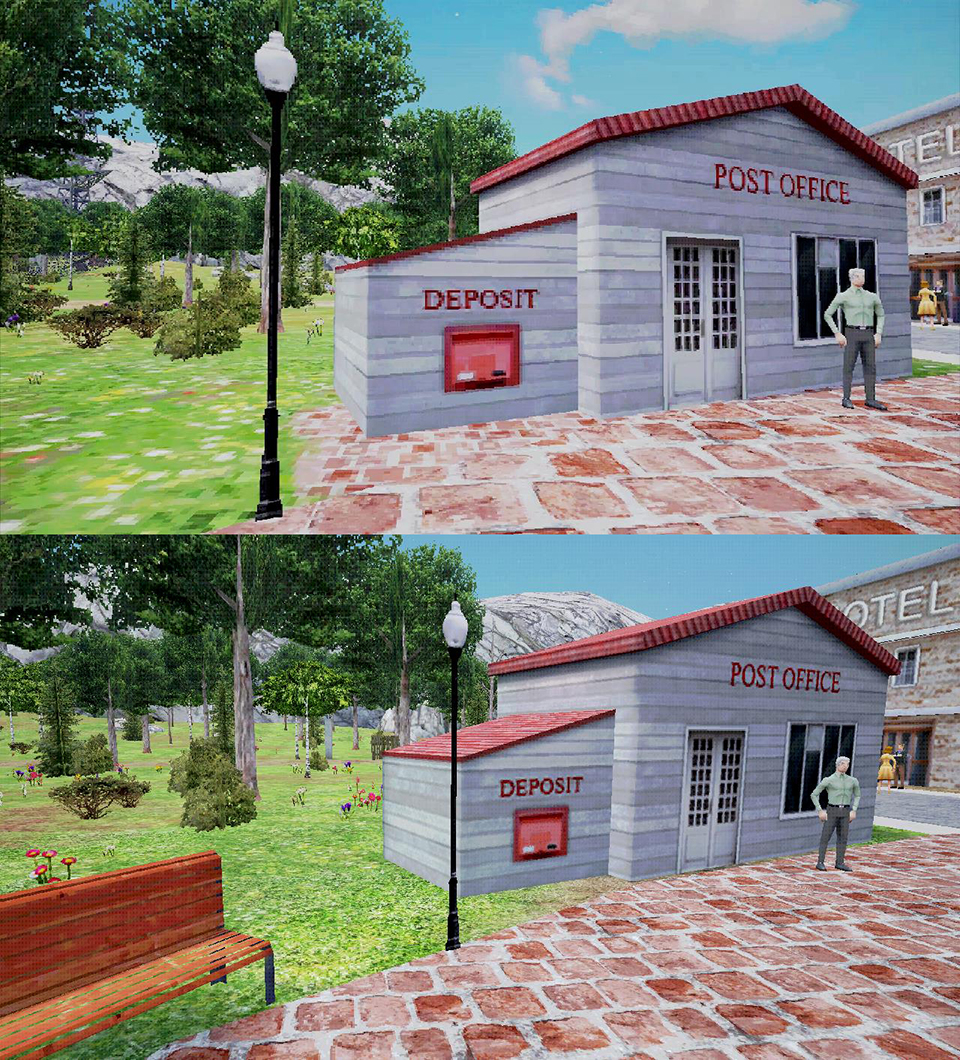 I initially pushed the low resolution look too far. 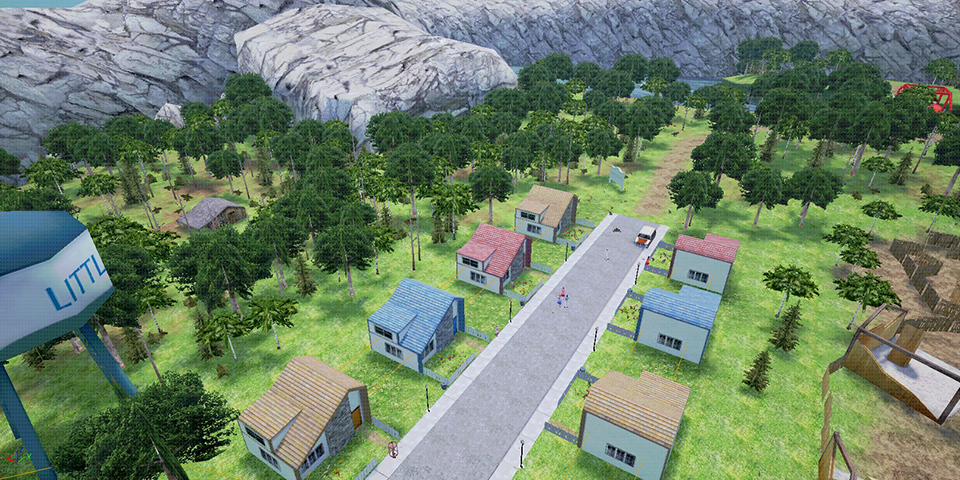 Adding baked shadows helped the game to have a more modern appeal.

We launched a Greenlight campaign and… it went okay…? We initially got pretty harsh comments and a 44% approval rate. It really had an impact on my morale, but Nic kept me from getting too discouraged. Despite the low traffic and poor reception, we got approved! So we didn’t ask too many questions and continued the development until...

I had sent a couple of emails to journalists and youtubers with the hopes that on the day of our release we’d see some traffic, but we got very little coverage. However, the little coverage we did get was amazing. It felt so rewarding to watch let’s players and streamers enjoy our little game and read the kind reviews we were receiving. Even the negative reviews were nice! We are still super thankful to everyone who played our game and reached out to us. 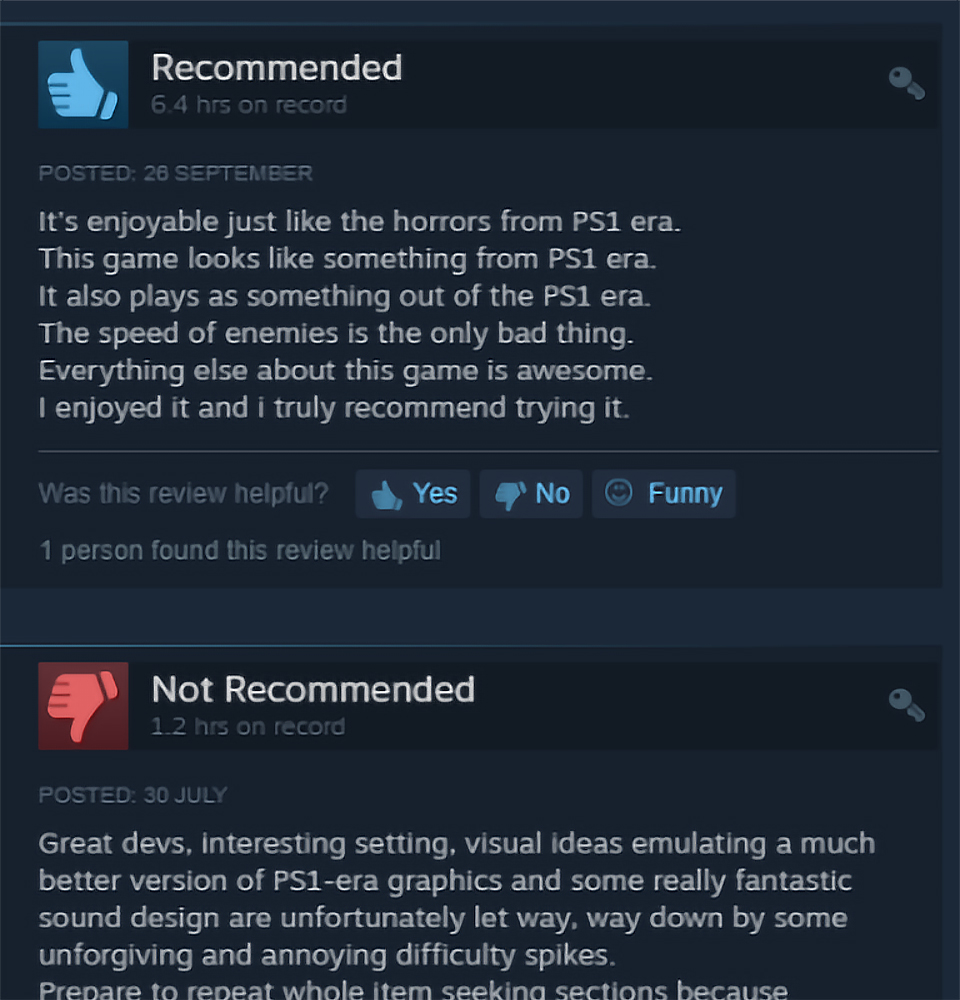 We got more positives than negatives and both sides brought really insightful comments.

Afterwards, we organized a little t-shirt contest for Halloween (won by Raincoat Videos) and released a small free DLC. We started seeing more buzz around Helltown when we started joining bundles. We even got to be in two of Puppet Combo’s bundles on Itch.io, so that was pretty cool!

We are both proud of what Helltown ended up being. It’s far from being perfect, but for our first game, I think we could have done a lot worst! The thing I am most proud of though is the fact that players seem to agree that the game has a lot of charm and personality. It truly means a lot, so thank you.

Here are some advices for upcoming indie horror devs:

Thanks for sticking around!

The year is 1959, you just got a job as a postman in a brand new town called Little Vale...